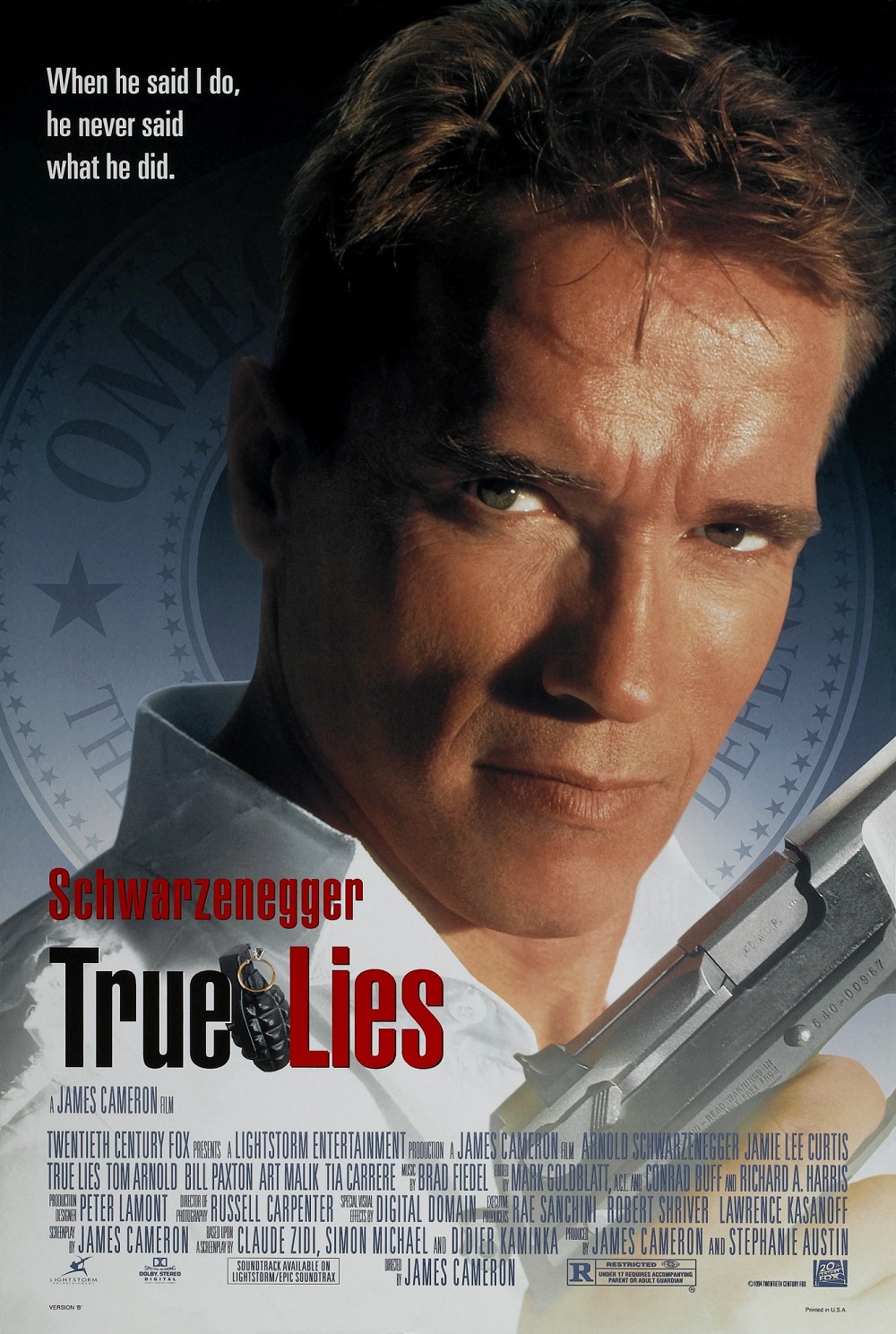 Secretly a spy but thought by his family to be a dull salesman, Harry Tasker (Arnold Schwarzenegger) is tracking down nuclear missiles in the possession of Islamic jihadist Aziz (Art Malik). Harry's mission is complicated when he realizes his neglected wife, Helen (Jamie Lee Curtis), is contemplating an affair with Simon (Bill Paxton), a used-car salesman who claims he's a spy. When Aziz kidnaps Harry and Helen, the secret agent must save the world and patch up his marriage at the same time.

• When he said I do, he never said what he did.

→ Jamie Lee Curtis performed the helicopter rescue scene herself. At her insistence, director James Cameron agreed to let her perform this scary spectacle. According to Jamie Lee Curtis, on the TV special promoting “True Lies,” it was Cameron’s idea for her to do the helicopter work; she said, “Oh, yeah. And just where are you going to be while I’m dangling way up there in the air, Jim?” And, according to her, he said, “Hanging out the door filming you with a hand-held camera.” So she decided that if he was willing to do that to get the shot, she could stand to do it, too. Curtis did the helicopter stunt on her 35th birthday: November 22, 1993.
→ The set of bra and matching panties worn by Helen Tasker during the striptease scene were Jamie Lee Curtis’s own. Curtis rehearsed the scene extensively with director James Cameron, and it was there that the fall she makes in the middle of the dance was conceived (it didn’t happen spontaneously during the actual shooting, as is often claimed). Arnold Schwarzenegger was not told of this beforehand, and this is hinted at when Harry briefly sits up in alarm, realizes that he is breaking character, and then relaxes. They did another take with the same gag, but Harry’s reaction didn’t look as spontaneous.
→ Jamie Lee Curtis called the film “without question, the greatest experience of my professional life so far.”
→ The striptease scene drew some criticism for its perceived misogynistic content. Director James Cameron later said that Jamie Lee Curtis had heavy input in how the scene was played out. The original idea was for Helen to go completely nude, but in the dark so that only her silhouette would be seen. It was actually Curtis’s own suggestion to do it in full light while keeping her underwear on. She demonstrated it to Cameron beforehand, who remarked that he was reminded there what is so cool about his job. He also noted that most of the criticism of the scene came from men, while most of the female reviewers praised it as an empowering and even liberating scene for Helen.
→ Jamie Lee Curtis won a Golden Globe for her performance as Helen Tasker.
→ Jamie Lee Curtis said that in his contract Arnold Schwarzenegger gets top billing then the title then it would have said starring Jamie Lee Curtis but when James Cameron finished editing the film and he saw that the film was really “a domestic epic, it’s a film about a marriage.” So James Cameron phoned Arnold Schwarzenegger and asked him if it would be ok to put Jamie Lee Curtis’s name before the title, to which Arnold Schwarzenegger immediately agreed. In the world of show business, as Jamie Lee Curtis said, “The credit is such a coveted, negotiable, commodity” that for Arnold Schwarzenegger to give her billing before the title “was a real mensch move on his part.”
→ Jamie Lee Curtis was glad her character was nervous because she was nervous about some scenes too.
→ The role of Helen Tasker was written for Jamie Lee Curtis, even though a lot of actresses auditioned for it.
→ Jamie Lee Curtis exercised every day to prepare for this role.

♦ Fear is not an option.