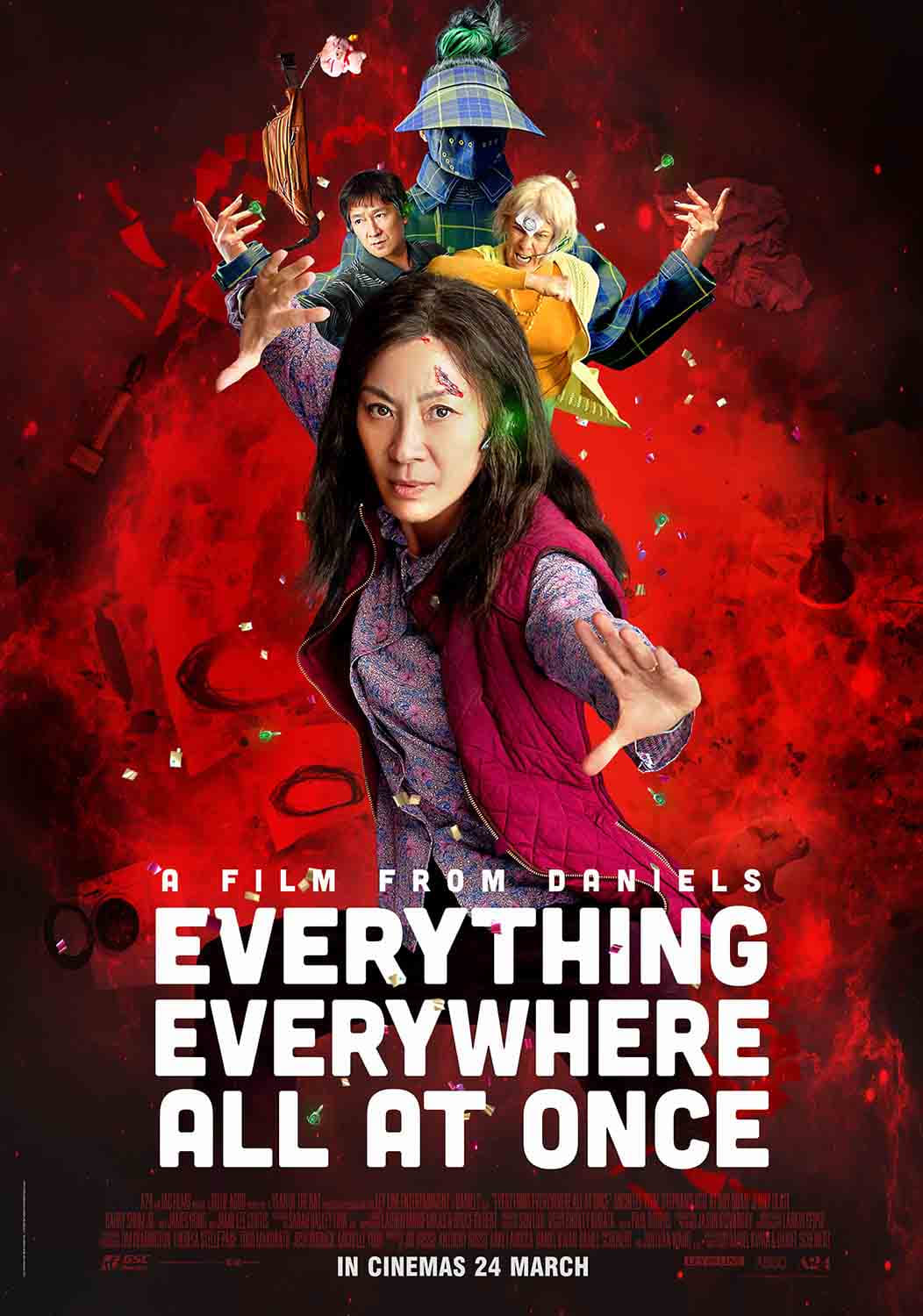 
After being audited by the IRS, an aging Chinese immigrant is swept up in an insane adventure, where she alone can save the world by exploring other universes connecting with the lives she could have led.

Evelyn Wang is a first generation Chinese-American woman who runs a struggling laundromat with her husband, Waymond. Tensions are high due to the laundromat being audited by the IRS. Additionally, Waymond is trying to give Evelyn divorce papers, Evelyn’s demanding father, Gong Gong,[a] has just arrived from China, and Evelyn’s daughter, Joy, has been trying to get her mother to accept her girlfriend, Becky.

While at the IRS building for a meeting with IRS inspector Deirdre Beaubeirdra, Waymond’s personality changes when his body is briefly taken over by Alpha Waymond, a version of Waymond from the Alpha Universe aka “Alphaverse”. Alpha Waymond explains to Evelyn that many parallel universes exist, since every choice made creates a new universe. The people of the Alphaverse, led by the late Alpha Evelyn, developed “verse-jumping” technology that allows people to access the skills, memories, and body of their parallel universe counterparts by fulfilling specific conditions. The multiverse is being threatened by Jobu Tupaki, formerly Alpha Joy. Her mind was splintered after Alpha Evelyn pushed her to extensively verse-jump; Jobu Tupaki now experiences all universes at once and can verse-jump and manipulate matter at will. With her godlike power she has created a black hole-like “everything bagel”[b] that can potentially destroy the multiverse.

Evelyn is given verse-jumping technology to fight Jobu Tupaki’s verse-jumping minions, who begin converging in the IRS building. Evelyn learns of Waymond’s plans to divorce her and discovers other lives where she made different choices and flourished, such as by becoming a kung fu master and movie star instead of leaving China with Waymond, who becomes a successful but lonely businessman. Alpha Waymond comes to believe that Evelyn, as the greatest failure of all Evelyns of the multiverse, has the untapped potential to defeat Jobu Tupaki. Alpha Gong Gong instructs Evelyn to kill Joy to hinder Jobu Tupaki, but Evelyn refuses. She decides she must face Jobu Tupaki by gaining the same powers as her, so she verse-jumps repeatedly while battling Jobu Tupaki’s minions and Alpha Gong Gong’s soldiers. Evelyn’s mind splinters and she discovers other, bizarre universes such as one in which humans have hot dogs for fingers and she is in a romantic relationship with Deirdre, and another where she works alongside a teppanyaki chef who is secretly puppeteered by a raccoon, in a reference to the film Ratatouille. She learns that Jobu Tupaki created the everything bagel not to destroy everything, but to destroy herself, and has been searching for an Evelyn who can understand her. Jobu Tupaki feels that because there are so many vast universes and unending chaos, nothing truly matters.

In other universes, the Wangs are about to lose the laundromat due to tax errors, Alpha Waymond is killed by Jobu Tupaki, and businessman Waymond rejects movie star Evelyn after decades apart. Evelyn is nearly swayed to Jobu Tupaki’s cause and stabs her universe’s Waymond. She almost joins Jobu Tupaki in entering the bagel, but stops when she hears Waymond’s calls to be kind and have hope. Evelyn defeats Jobu Tupaki’s minions by using her multiverse knowledge to find what is hurting each of them and gives them happiness. Evelyn reaches Jobu Tupaki and tells her that she is not alone and that Evelyn will always choose to be with her, despite everywhere else she could be. Meanwhile, in parallel universes, Evelyn confronts Gong Gong and reconciles with Waymond and Joy, and Waymond convinces Deirdre to let the Wangs redo their taxes. Jobu Tupaki initially rejects Evelyn, but returns to her, and they embrace.

In an epilogue, the family’s relationships have improved, Becky is now part of the family, and they return to the IRS building on a second chance to file their taxes. As Deirdre talks, Evelyn’s attention is momentarily drawn to her alternate selves and the multiverse, before she grounds herself back in her home universe.

→ To keep plot details under wraps before the trailer was released, the official synopsis simply said, “A woman tries to do her taxes”.
→ In a deleted scene, Evelyn played a talking urn that contained her ashes. The scene was removed from the movie, but a shot of the urn remains in one rapid-cut sequence.
→ In an unusual move, the majority of the film’s scenes were shot at a high frame rate. This was done to give the editors the flexibility to put different parts into slow motion that weren’t originally planned to be.
→ Jamie Lee Curtis would confirm on Instagram that the film’s final day of principal photography was the day before Los Angeles began its COVID-19 imposed lockdowns in March 2020.

♦ Now, you may only see a pile of receipts, but I see a story. I can see where this story is going. And it does not look good. It. Does. Not. Look. Good.
♦ I’m sure you have a lot on your mind, but I cannot imagine anything mattering more than this conversation we are having right now about your tax liability.
♦ I was just hoping you could enlighten me on how, as a laundromat owner, a karaoke machine would constitute as a business expense?

In the forty–four years since her feature film debut, Jamie Lee Curtis has established herself on screen as a scream queen, a comedic icon, a sex symbol and an action star. In 2018, her anticipated return to the Halloween franchise set box–office records that have yet to be beat. Off screen, her dedication to children's health and LGBT rights worldwide have made her one of the most philanthropic celebrities of our time.